Bitcoin has undergone a slight drop since the $16,400 highs. Though analysts think that the cryptocurrency remains bullish as the $16,000 support level holds.

Bitcoin Could Move Back Toward the Highs as $16,000 Holds

Analysts think that Bitcoin could move back toward the local highs as it holds $16,000 with precision. Sharing the chart below, one trader said recently:

“$BTC looks ready to test at least $16.2k Multiple wicks into previous resistance is reminding me of the weekly retest at $10k.” 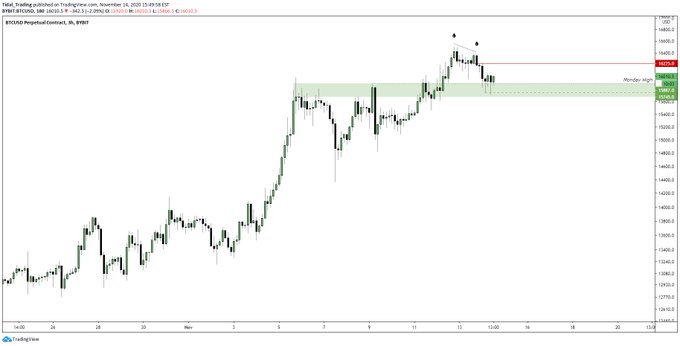 Other analysts have expressed this optimism about Bitcoin.

Referencing a chart, the same trader that predicted Bitcoin would see a V-shaped reversal during March’s recently said the following, sharing a chart indicating that the cryptocurrency could rocket to $17,000 or even beyond that:

“Breakout, retest, strong volume sweep down, retraced the entire volume zone and more. More dump would surprise me. Breakout trading time, above red. 15-15.3 would be an ideal place to bid.”

The long-term trends for Bitcoin remain positive despite whatever uncertainty there is in the extremely short term. Tyler Winklevoss, CEO of Gemini and a Bitcoin billionaire recently said:

“I do think we will see an all-time-high price for #Bitcoin before 2020 is over. Even though the price has climbed from 10k to almost 14k in less than a month, it hasn’t really gone on a breakout run yet. When we start to see 3-5k surges then the bulls will be on the run.”

Winklevoss thinks that Bitcoin could hit $500,000 in this market cycle due to BTC passing gold.

“Bitcoin has already made significant ground on gold — going from whitepaper to over $200 billion in market capitalization in under a decade. Today, the market capitalization of above-ground gold is conservatively $9 trillion. If we are right about using a gold framework to value bitcoin, and bitcoin continues on this path, then the bull case scenario for bitcoin is that it is undervalued by a multiple of 45. Said differently, the price of bitcoin could appreciate 45x from where it is today, which means we could see a price of $500,000 U.S. dollars per bitcoin.”

This is in line with a sentiment shared by many other respected investors in the space.

Previous 3 reasons why Bitcoin price quickly recovered after dropping to $15.7K
Next Incoming Senator hopes to ‘bring Bitcoin into the national conversation’

Bitcoin price is on the rebound, but after such a sharp fall and more than …